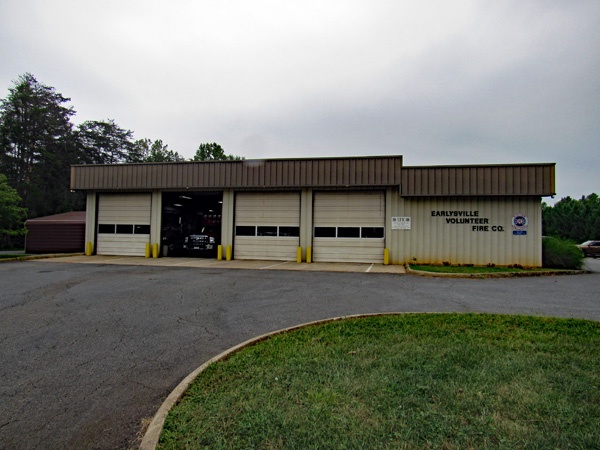 The Earlysville Volunteer Fire Company is located on Reas Ford Road near Earlysville proper. This company works very hard to protect our community!

Our Earlysville Volunteer Fire Company – this piece was written by Earlysville resident and committed Fire Company volunteer, Lois Dean.  I’m not certain of the date, but I would guess it was around the year 2000.

“Before the early 1960s, the community of Earlysville was mostly rural farmland. There was a small grocery store with gas pumps. The post office was located in the corner of a home next to the grocery store. There were no subdivisions in the area. Then, Earlysville, like most communities started growing with many new homes being built. The local Ruritan Club saw the need for a local Volunteer Fire Company and they held community meetings to gather interest and support. The Charlottesville Fire Department donated the first engine to be used by the newly organized Fire Company with the stipulation that it had to be housed in a building.  Mr. James B. Murray, who owned Murray Manufacturing, donated land to the new fire company.  Walter and Robert Jones, local contractors and members of the Fire Company, donated their time to building the first fire station. Quite a few of the members of this new company worked at Murray Manufacturing and were allowed to leave their jobs in the daytime to run fire calls. They fought brush fires with rakes and tree limbs before having a fire engine or building. At that time there was no 911 dispatching system. Fire Calls went into the Charlottesville Fire Department and from there to the Earlysville Volunteer Fire Company by phone. Several of the wives of the firefighters received the call by phone and each dispatched a list of firemen.

In 1983, the Earlysville Fire Company outgrew the first fire station and built a new station, also located on Reas Ford Road. At the present time, the Fire Company runs both fire and medical calls and covers a “territory” of 100 square miles. We started with one fire engine and now have a fleet of 2 engines, 1 tanker, 1 Hazmat unit, 2 brush trucks, a “first responder” medical car and a command car. The “Hazmat Unit – Support 47” went into service in 1996 and was the first “Hazmat Unit” Countywide. It was a 1986 model Chevrolet step van truck donated by Virginia Power and refurbished by the members of the Company.  Support 47 was used to respond to chemical, oil and Hazmat spills and it served as an air supply unit on structure fires and “mutual aid” support for the County.  It also had a generator for lighting and to make coffee when the firemen are on calls for extended periods of time. In the early 1960s when the Company was first founded, a fire engine cost approximately $38,000. Today, that fire engine cost is approximately $400,000.

Also, at that time, there were no “first responders” or “EMT” running emergency medical calls in any of the fire companies, because the program did not exist. In 1985, the Earlysville Volunteer Fire Company, in conjunction with the Charlottesville Albemarle Rescue Squad, became the first “First Responder” group to see how it would work to have a volunteer fire company running medical calls along with the rescue squad. The program was so successful that now all the County volunteer fire companies are a part of the “first responder” program.

The Earlysville Volunteer Fire Company also provides “mutual aid” to the surrounding fire companies as needed. The Earlysville Volunteer Fire Company is an “Emergency Shelter” during natural disasters and a source for obtaining water. We are very fortunate in our Company to have a “Junior Firefighter” program. This is a program for young people 16 and 17 years of age whom are interested in being able to join a volunteer fire company. We have for the last several years, sponsored a “Junior Firefighter Academy” which has been very successful. During this week, to two week long course, these young people are taught about firefighting, the equipment on the engines and how to use it, about motor vehicles accidents and how to extricate someone from a vehicle, and how to fight brush fires, etc.

The Earlysville Volunteer Fire Company serves the community with pride. We strive to be as thoroughly trained as possible so that we can best serve the community. Our goal is to protect homes and businesses, to render help to those in need of medical attention and to protect and save lives. At the present time, we have 46 senior members and 12 junior members on our roster. We are always looking for new members to join and support the community efforts of the Company. “

Check out these "Just Listed" Homes!